From humble beginnings in 1949, Kew Jewish Centre developed into an active congregation. It was started by the remnants of the destruction of European Jewry, immigrants who fled to the shores of Australia.

With great vision, the late Norman Smorgon purchased a property on the corner of Walpole and Malmsbury streets, Kew. A gracious old home with a beautiful garden was used for social activities and Shabbat services. As the need arose, a front room was set apart as a permanent Shule. A temporary Ark, Reading desk and school benches made up the furnishings. In order to maintain a regular Minyan, the original committee volunteered to assist on Friday nights by organising a roster system. The community was growing fast and the first stage of expansion took place in 1954, when Ben Fink designed and supervised the demolition of the north wall of the old house to construct an additional room for 120 congregants. Services were conducted by Ba’alay Batim and Chazan S. Gescheit.

The growing congregation needed the services of a spiritual leader and Rev (later to be Rabbi) Jacob Schreiber, at the time a master at Mount Scopus Memorial College, was appointed as a part-time Minister in 1956. In 1957 demolition took place at the southern wall of the old house and a large room was added. A consecration service was held on the 25th August to mark the opening of the new synagogue which could house about 500 congregants. This building is known today as the Norman Smorgon Hall.

With such a large congregation, there was a need for providing Jewish education to the younger generation. The Beth Hillel Parents’ Association, in conjunction with the United Jewish Education Board (UJEB) ran classes. As a result of negotiations with the World Zionist Congress, the German Government agreed to pay reparation money for their war-time atrocities, and in 1959 the congregation received funds to build four classrooms and around 60 children were enrolled in classes outside of school hours. In 1963, a Mount Scopus Memorial College Kindergarten commenced in the same classes with 24 students. At the same time, with 160 children enrolled in UJEB classes, plans were prepared for the building of a kindergarten and school building for Kew Division of Mount Scopus College and a new synagogue.

On 25th August 1963, the Foundation stone was laid for the present Synagogue in the presence of the then Prime Minister of Australia, Sir Robert Menzies. The late Tony Hayden, who had designed Caulfield Shule, was commissioned to draw up plans for Kew Shule and one can notice the similarities between the two Shules. After the Shule was completed, the name of our congregation was changed from Kew Jewish Centre to Kew Hebrew Congregation. On the 15th August 1965 the Synagogue dedication ceremony took place and at that time Rabbi Jacob Schreiber was appointed as the first Minister to the Congregation.

In 1966 Mount Scopus Memorial College increased classes from Kindergarten to include Prep and Grade 1. On the 28th May 1967 a school building was opened and in 1968 a Grade 2 class was added.

On the 14th February 1982, the Governor General Sir Zelman Cowen and his wife were guests of honour for the dedication of stained glass windows on the Western side of the Synagogue. These beautiful windows were designed by Mr Louis Kahan and presented to the Synagogue by Mr and Mrs Eric Smorgon.

In 1984, Rev Steven Link became the Chazan and Assistant Minister of the Congregation to assist Rabbi Schreiber. During the first few years at Kew Rev Link studied for his S’micha and in 1988 received his S’micha and was inducted as Rabbi of the congregation. In that same year Rabbi Jacob Schrieber retired after serving the community for 32 years, 20 of those as full time minister.

Over the years many dedicated people have served on the Board of Management of the shule and worked in various capacities to assist the paid staff in the running of the shule and its activities. In 1995, 5 Life Governors were inducted at a special Shabbaton. Eva Joel, Jack Carman, Max Firer, Martin Freiberg and Alex Grossman were honoured for their untiring commitment to the congregation. In 2007 Jack Bernstein, Ralph Collins, David Goldsmith and Liz Levin were also honoured as volunteers who had served on the Board of Management for many years. Ralph Collins also received recognition as the Kew Hebrew Congregation nominee for the 2007 JCCV Volunteer Awards. In 2008 Pearl and Mendel Buchanek, Rose and David Katzenellenbogen and Jhyll and Sam Teplin were honoured for their long standing volunteering for the congregation.

The congregation has always offered religious services and all life cycle ceremonies for members and the community. The Shule runs educational and cultural programmes for its members through the Kew Hebrew Congregation Library. These programs include shiurim (adult education on Jewish Law, How to run a Seder, following the Rosh Hashana and Yom Kippur Services, Torah commentary etc); training to facilitate members’ participation in services, Hebrew classes; The Leon Cebon Memorial Lectures; guest speakers; film nights and discussions; children’s programs such as Purim, Sukkot and Chanukah celebrations, story time during the Shabbat morning service, Bat Mitzvah and Bar Mitzvah classes and a post B'nei Mitzvah teen group ("The Bartmi Group"). In March 2010 we commenced a weekly Sunday evening beginners Talmud class, taught by Professor Rob Berkowitz, which proudly continues.

The congregation offered a Senior Citizen’s club under the auspices of National Council of Jewish Women which ran every Monday morning and offered hand crafts, card playing and a delicious light lunch as part of their activities. The club closed in May 2012, shortly before the death of its long-time President, Mrs Eva Joel OAM. KHC partners with Jewish Care and the Leo Baeck Centre in running a weekly Wednesday morning exercise class "for the young at heart”. The venue of the class alternates each school term, being held for two terms per year at KHC and the other two terms at the Leo Baeck Centre.

From 2007 to 2009, Mr Samuel Altschul (now Rabbi Altschul) worked as Program Administrator and Assistant Minister, developing and running programs and educational publications as well as assisting with the running of religious services.

In 2014 Rabbi Boroda concluded his tenure at KHC and for several years thereafter services were run by several contracted Rabbis.

In February 2022, Rabbi Shmueli Feldman was appointed as the permanent Rabbi. 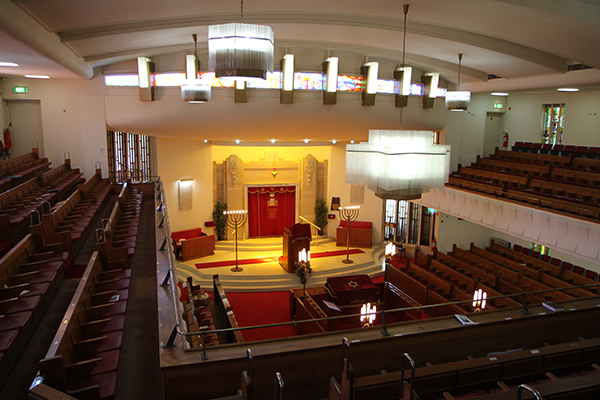